Definition and Characteristics of Social Structure 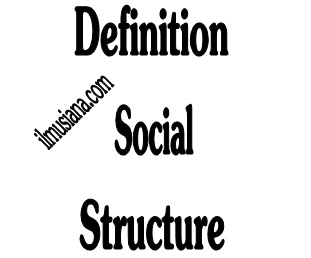 Soerjono Soekanto perceives social structure as a mutual relationship between social positions and social roles. Abdul Syani, on the other hand, defines social structure as a social order in society. There are mutual relationships between status and role within that social order, with a limited series of particular social elements, remain intact. Such status and roles refer to a certain behavioural regularity, hence, to create a society. Social structure within society forms a network that consists of principal social elements such as social groups, culture, social institutions, social stratification, power and authority. In short, it can be concluded that social structure included all the primary social elements intertwined, incorporating norms, social institutions, social groups, and social strata.


Abdul Syani mentions that social structure has some of the following features:
Social structure recognizes two key concepts which are status and role. Ralph Linton defines status as a series of rights and obligations, whilst role is the dynamic aspect emanates from a person’s status. Linton further categorises status into two types: an ascribed status and an achieved status. An ascribed status refers to a status which a person inherits since birth. It is given without considering abilities or a particular skill. An achieved status, on the other hands, is awarded to a person shows some good qualities.

According to Soerjono Soekanto, status and role play a great role in determining the patterns of relationship between individual and society. These two concepts are the core elements of the strata system. By having a certain status, a person is endowed with a set of rights and obligations which direct his/her behaviours to act in accordance with the pattern of relationship or norm specified by the status.
Definition and Characteristics of Social Structure 2015-10-23T07:16:00-07:00 Rating: 4.5 Diposkan Oleh: Admin Ilmusiana