Social stratification appears as the natural consequence of processes occurring in society. Factors contributing to social stratification are skill, age, physical nature, sex, originality of society membership, and wealth. For illustration, a person who has a strong built is able to protect a weaker person and a wise and capable person will be naturally appointed leader within society. Accordingly, society strata will be formed based on special capabilities. 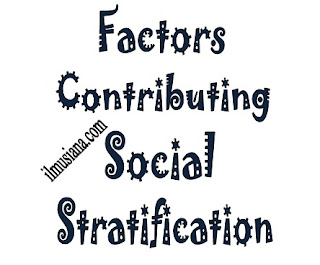 In subsequent years, social stratification is deliberately created as a social subsystem in order to attain certain purposes. A case in this point is power within the government system. Government is purposely structured around hierarchy and responsibility. Another example is rank position in the armed forces starting from lower ranks to higher military officers.

Differences in biological features such as skin colour, ethnic background, and culture in a certain society generate social classes. For example, social classes were created based on skin colour in South Africa during Apartheid or European society before the Second World War which perceived white people as superior.

This is closely linked to power function and status within social stratification. Hierarchical position or status of each member of society according to work division exists in every society both primitive and modern.

Stratification slowly occurs because of the allocation of rights and power rarity. In other words, the state of being rare is felt when society starts to differentiate on the basis of position, power means, and functions at the same time. Accordingly, a condition in which society members have different access to rights and opportunity can create social stratification.
Factors Contributing to Social Stratification 2015-10-26T23:46:00-07:00 Rating: 4.5 Diposkan Oleh: Unknown