Forms of Social Differentiation: Racial Differentiation - Race is defined as a number of people who share the same physical features. If we mention a particular race, we thus describe ther physical features instead of their cultural characteristics. According to Ralph Linton, humankind are categorised  into three general racial types, notably Mongoloid, Caucasoid, and Negroid. 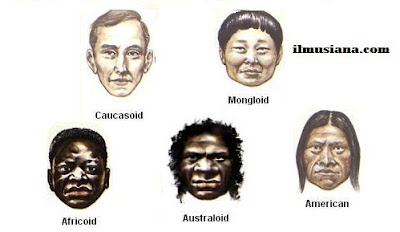 Caucasiod has notable physical features such as high nose, white skin, blond and brunette hair, and straight eye-lids. This race is further classified into five subraces that are Nordic, Alpine, Mediterranean, Armenoid, and Indic.

A.L. Kroeber introduces classification of humankind of the following:
Each and every race is bound to have different characteristics. However, humans's physical differences are few, compared to other being such as animal. Most of scientists nowadays believe that all humankind races spring from one big umbrella of race as the result of evolution process, for instance, the development of the early human species such as Pithecanthropus erectus who has different physical features from modern human species.

Factors contributing to the physical differences of each race are as follow:

People live in cold region will have a high nose. This way it will be more helpful for people to heat and humidify the air before inhaling. People who inhabit in tropical areas are most likely to have a wider nose.

Different kind of food influences a variety of human's body. People who have bigger frame are spotted in cold places such as in the Northern hemisphere. On the contrary, people with small and short features are likely seen in tropical areas.

At present time, it is difficult to pronounce that members of the same race group will precisely share the same physical characteristics. It is due to high mobility of people which very likely to cause mixed marriage or amalgamation. For example, Caucasoid who amalgamates with Negroid is inclined to have children with either dark or light skin.

For instance, Indian-Asia people share the same physical typology with Mongoloid but inherit the facial form of Caucasoid. Another case is Ainu people in northern Japan whose facial form is closed to those of Mongoloid but their skin colour and hair type are Caucasoid.