Human nervous system is composed of sensory receptor of the sense (nerves which are located in the five senses), stimulus transmitter that transmits stimulus to the nerve center (sensory nerver), the central nervous which sorts and interprets the stimulus information, and motor nerve that transmits message from central nerve to effectors. 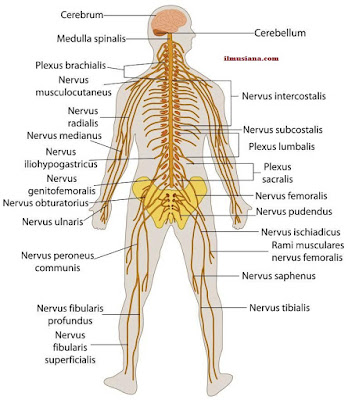 Stimulus comes from out of the body and received by sensory receptors of the sense eyes, nose, tongue, ears and skin. The information that is received by the nerve ends of the senses then will be changed to impulse, like weak electricity current. Impulse then is transmitted by sensory nerve to the central nervous. The central nervous then interprets the information from the sense to be a message. This messge that is called impulse is also transmitted to the effectors (e.g. muscle) by motor nerve. Muscle that receive order from the central nervous then do their job as a response to stimulus. Based on their function, nerve is classified to:

Brain is located in the skull cavity that is protected by brain layers (meninges) and brain fluid (cerebrospinal fluid). Brain is the central coordination of conscious nervous system. Brain consists of the largest (the most prominent) of brain (cerebrum), and midbrain (mesencephalon).

Spinal cord (medulla spinals) is located in the vertebrae. The functions of spinal cord the transmitting impulse to and from the brain and controlling many reflex activities. Brain and spinal cord are conducted by continous spinal cord (medulla oblongata) that control respiration, heartbeat and widening and constriction of blood vessel.

Peripheral nervous system consists of fibrous nerves which are formed by elongation of brain (cranial nerve) and spinal cord (spinal nerve). The are 12 pairs of cranial nerve and 31 pairs of spinal nerve.

Sympathetic nerve is a set of nerves that elongate from spinal cord to form ganglion then go to parts of body that are coordinated. Ganglion consists of nerve cell body. The examples of sympathetic nerve functions are inhibits intestine peristaltic movement, accelerates heartbeat and dilates pupils.

Parasympathetic nerve is a set of nerve that starts from brain and down spinal cord (sacral), elongate to form ganglion then go to parts of body that are coordinated. The examples of parasympathetic nerve functions are pupil construction, harder digestion activation, and induce slower heartbeat inducement.
Human Nervous System 2015-10-29T22:26:00-07:00 Rating: 4.5 Diposkan Oleh: Unknown