Human is completed with reproductive system since they were born. But, the system does not work until they have been a teenager. When they are teenagers, man and woman start to produce specific cell that is called gametes. If both cells (gametes from the man and woman) meet and fuse, it will form a zygote that will develop to be a human. How does reproductive system work?

Male reproduction system is designed to produce, store, and send sperm. The system is composed of testes, reproduction duct, addition gland and penis.

Testes are male reproductive organs which produce sperm cell. A couple of testes are placed/packed in the scrotum that is out of the body. Testes are composed of several parts.
In producing sperm, the body temperature must lower (about 2-30C) than normal temperature. Sperm that is produced has no limited number. The production is controlled by hormone that is secretes by hypophysis gland. To form a mature sperm, it is needed 74 days of spermatogenesis process.

Penis is a copulation organ. Copulation is process when penis entering vagina to spread out sperm.

Every woman has a couple of ovaries: the right and left ovaries. Ovary has two main functions: produce ovum and hormones. Ovum forming process is called oogenesis. Oogenesis occurs gradually and periodic, once a month. The moment when ovum left ovary is called ovulation. Hormones produced in ovary are estrogen and progesterone.

Every woman has a couple of uterine tubes, right and left tubes that have about 12 cm long. In this tube fertilization occurs. At the base of uterine tube, there is a funnel-like structure to catch the ovum.

Uterus is the organ where embryo grows and develops to be a fetus that is ready to be born. Uterus has pear-like shape and thick walls. The wall is composed of three layers of tissue: outer tissue (cerose), middle tissue (myometrium), and inner tissue (endometrium).

During ovum maturation, uterus wall will thicken. This wall thickening is prepared for embryo adhering (implantation) if fertilization happens. If fertilization does not occur during the monthly cycle, the wall sloughs off and is discharged in the process known as menstruation. Menstruation occurs periodically once a month.

Ovum forming process and menstruation occurs cyclically. There are four stages in for one cycle.
In average, the monthly cycle needs about 28 days each month (once a week). It means, the cycle can be earlier or later for about 1 week.

Vagina is woman copulation organ, the way for birth and the way for releasing endometrium when menstruation occurs. 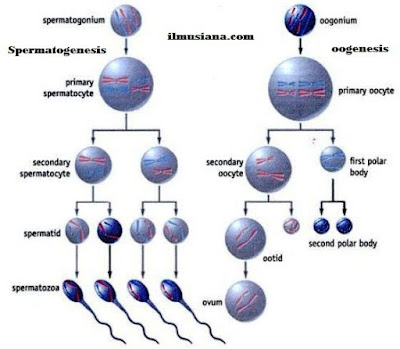 Production process of sperm and ovum is different from that of other cells. These cells are produced by meioses, as shown on the picture. Each cell divides twice, so it will produce 4 daughter cells. A spermatozoid will produce 4 sperm, whereas an oocyte will produce an ovum. 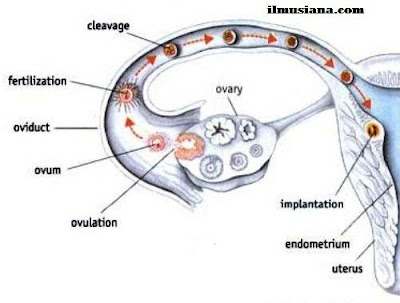 In the ovulation, ovary will secrete mature ovum. Ovum then will be caught by the funnel-shaped of the oviduct. When copulation occurs, sperm will enter the uterus and then enter the oviduct. In this tube, fertilization occurs to form zygote. Zygote will divide continuously to form embryo. The embryo then flows to the uterus. It will adhere and culture on the uterus wall (implantation). After embryo adhere, it will form placenta between embryo and uterus wall. Belows are several function of placenta: